‘A variety of delightful arithmetical questions’, or, how to stop your garden from flooding

This is the latest post from the Digital Miscellanies Index blog. You can read the rest of the blog at digitalmiscellaniesindex.blogspot.com

Delights for the Ingenious, a miscellany that was published in monthly installments in 1711, contains some of the more peculiar poetical texts that the Digital Miscellanies Indexing team have encountered so far. The miscellany promises ‘A vast variety of pleasant enigmas, delightful arithmetical questions, curious stories, witty epigrams, surprizing adventures, amazing paradoxes, together with songs, anagrams, emblems, and other useful and diverting subjects both in prose and verse’.

Delightful arithmetical questions are a dominant sub-category amongst this vast variety, perhaps unsurprising as the miscellany’s editor, John Tipper, was a keen mathematician. Each issue of the miscellany contains several poems which hang mathematical problems on different scenarios, including drinkers working out the bill in a tavern; lovers trying to calculate the hours till their next meeting; tea-drinkers trying to work out the capacity of a teapot; fruit-sellers adding up their profits; and shepherds trying to keep account of their sheep.

These questions actively engaged a community of readers who were encouraged to send in answers and to submit their own questions – all in verse - for future issues of the miscellany. The verses are of varying quality, but some of the more ambitious construct narratives and attempt to blend literary genres with their arithmetical problems. Here’s a question about stopping a garden from flooding which combines elements of the ‘happy man’ or beatus ille mode with an arithmetical query:


Blest with good Health and with a fair Estate,
Blest with a beautiful and vertuous Mate;
Being blest with Children and with Money store,
A Man so blest, you’d think should ask no more,
For few Men of such Blessings has such Store.
To crown these Blessings, and to please my Wife,
To smooth the Solitudes of Country Life,
A Noble Edifice I have erected,
Likewise an oblong Garden Place projected:
But my misfortune is, the Ground being low,
That ev’ry Show’r the Waters overflow,
Its Surface, whose extent I now will show.
Six hundred forty Feet the Length shall be,
The breadth Four hundred eighty wanting three,
Now to raise it a Foot, I this way do propose,
A Sixteen Foot Trench shall my Garden Enclose,
That the Earth which comes out shall just answer the matter,
And so by this means shall get clear of the Water.
The Depth I have given, the Breadth I do want Sir,
So good Sir, be pleased to send me Your Answer?


Not quite as easy as it looks - here’s our attempt to work out how big the trench should be, with the aid of pictures 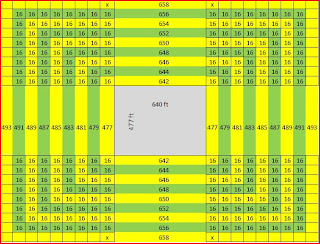 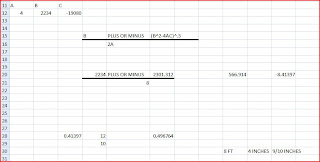 Readers of Delights for the Ingenious responded enthusiastically to the question, with at least five of them sending in answers. Here’s one, courtesy of Henry Beighton:


I will communicate what you require,
To raise your Garden just as you desire;
Eight foot four Inches, and with nine Tenths more,
Will give the Trenches breadth you did implore.


Digging a trench 16 foot deep and 8 and a bit foot wide in order to get enough soil to raise the level of a garden by one foot does seem rather excessive behaviour. When the question is answered, the hole in the ground starts to look more like a moat than a trench, particularly as the area is apparently prone to flooding – but realism isn’t what’s important in these poems. Rather, what’s key about this miscellany and the verse it contains is the way it promotes maths so enthusiastically to its audience, and how it engages that audience as active solvers of its numerical problems. As the editor John Tipper claimed in the final issue of Delights for the Ingenious, those who have collected each number of his miscellany now ‘have beyond all Contradiction, the best Arithmetical Questions that ever appeared in Publick before: So full of Humour, Ingenuity, and Variety, that I challenge the whole World to shew the like.’

(With thanks to John Batt for help with the maths!)